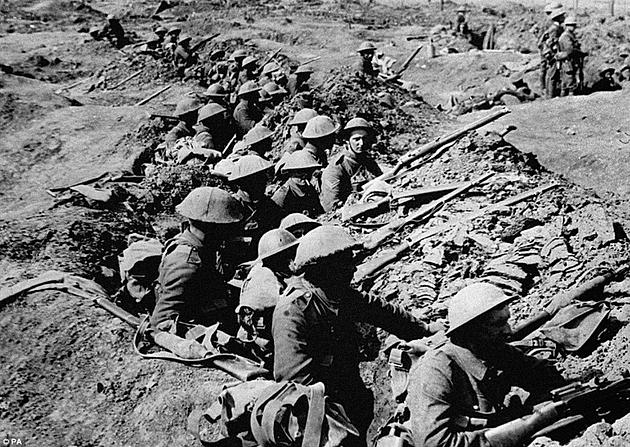 This morning I was driving to a 10.30 meeting and had the providential opportunity to listen in to the event in Glasgow marking the start of the First World War, 100 years ago to the day.

During the ceremony we heard excerpts of the diaries of those who had fought, some of whom had fallen, and political leaders – including Prime Minister David Cameron – prayed for the strength and the courage to act in service to the people they govern, and to nurture and strive for peace.

It was a moving ceremony, and a cause for contemplation of what we have done as human beings. As a youngish guy myself, I imagine the huge beasts of war, trampling underfoot a generation of talent that had been emerging during the turn of the century. It is hard to imagine what the world might have been like. Many attribute some of the immense inventions of the last century to innovation forced due to needs of war. But perhaps without the war we would not be plundering the world at the rate that we are right now. Perhaps a more moderate approach would have been pursued upon the discovery of new technologies, with proper consideration to the environment and to sustainability.

Yet what could have been is a mystery. What remains is the responsibility that we bear to one another for the deeds past, for the Second World War that followed the First, for believing that the destruction that we had spread all around us was inextricable; for creating ideologies that were so exclusive of one another that morality was a weapon wielded by man to swear the destruction of the other.

Today we are surrounded by enlightened spirit, by ambitions for improving living and political standards the world over. Today we have what is becoming global communication technology infrastructure that allows us to share with one another and understand each other like never before in history.

Yet despite all that, and despite the end of the cold war, each year that goes by seems to bring the world closer to a precipice from which the destructions of the First and Second World Wars would – heavens forbid – be eclipsed. Wars are raging across North Africa and the Middle East; Europe, the US and Russia stand at the crossroads; military posturing between China and Japan over disputed islands.

So much of this comes down to disputes of land. But at its heart is an ideology that says we as a human species cannot live together to mutual benefit. Even the European Union, which was sown using the language of collaboration desperately found amidst the burning embers of Europe – today sounds the trumpet of isolationism when talking beyond the borders of Europe.

Somehow, non-cooperation is so embedded in our cultures that it finds itself seeded even at the heart of sectors that are explicitly entirely about charity.

Yet we all know deep down that cooperation is a great idea. It’s what makes human beings so smart and brilliant.

It seems as though there is a contradiction. And there is.

To me, this contradiction exists because we haven’t yet innovated our way to co-existence. We haven’t yet created a cultural infrastructure, rooted in practice – that lets us live together in genuine peace. Whilst we know in our hearts that it is better to work together, we simply have not figured out the logistical process for achieving the mutual benefit in all situations that we find ourselves. Whether it is religions, nations or organisations, it all comes down to one bottom line: what’s in it for everyone? That’s why social innovations are so important, and that’s why we believe so much in the work we are doing at Humanity Online.

It’s an idea and a vision; a vision that has been articulated into method of practice; a seed that is beginning to take root and soon we hope will grow. In the meantime, let’s remember this day, 100 years ago, and think of one conflicting situation in which we find ourselves – and come up with a mutually beneficial way forward.